Plasma Display Panels
Alternating current plasma display panel (ac-PDP) technology has ushered in a new era in the manufacture of large, flat, and lightweight displays. The reduced thickness and weight, rich color, with a conveniently wide viewing angle has led the plasma display panels (PDPs) to become an important flat panel display system in the consumer television market.
A PDP works by sandwiching a neon and xenon gas mixture between two sealed glass plates with parallel electrodes deposited on their surfaces. The plates are sealed so that the electrodes form right angles, creating pixels. When a voltage pulse passes between two electrodes, the gas breaks down and produces weakly ionized plasma, which emits UV radiation. The UV radiation activates color phosphors and visible light is emitted from each pixel. A gas discharge in a PDP is a key process for conversion of an electrical representation of an image to visible light information via generation of vacuum ultraviolet (VUV). The schematic diagram of a single pixel of PDP is shown below. 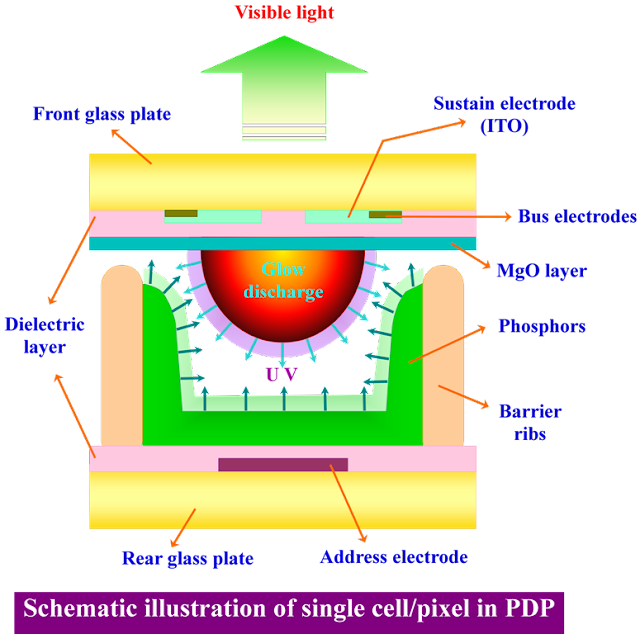 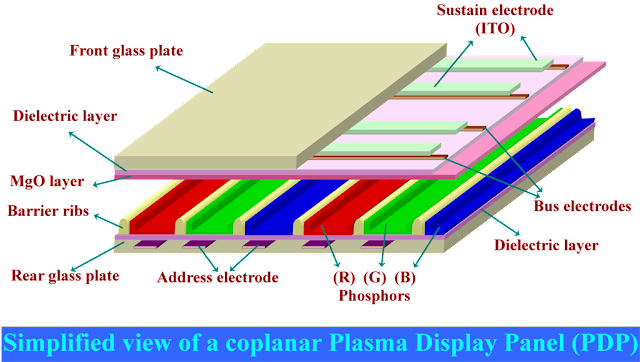 Secondary Electron Emission Coefficient
In ac-PDPs, the metal electrodes are covered with a glass-like dielectric layer upon which a thin sputter-resistant dielectric film is deposited. This protective layer plays a key role in preventing ac-PDPs from sputtering of ions and other plasma particles, like electrons, photons, meta-stable atoms, and emits a large amount of secondary electrons. The secondary electron emission (SEE) coefficient, denoted by γ, provides information on the efficiency of electron emission from the cathode due to ion bombardment. Emission by ions can be one of the major causes of electron emission, but it is never the only cause and often it is not dominant. That is why the coefficient is more often named as effective secondary electron emission coefficient γeff.
This SEE yield of the cathode is an important parameter in determining the discharge characteristics in a PDP. A high γ is beneficial in maintaining high plasma density in the PDP cells and is important for lowering of the firing voltage, increase of lifetime, and enhancement of the luminous efficiency. The discharge (firing and sustaining) voltages of PDP are largely dependent on the γ value of the protective layer. These voltages are also important in reducing the product cost.
High Definition Plasma Display Panels (HDPDP) are the future for next generation plasma TVs, which require substantial innovation and improvements in the existing technology platforms to enhance secondary electron emission of protective layers.
Measurement of SEE yield (γ)
Our group’s research is directed towards the measurement of the SEE yield (γ), which is a crucial parameter for characterization of dielectric layers and their applicability in the PDPs. This project is a part of a larger academia-industry collaborative project aiming to develop indigenous HDPDP technology in India.
There is no commercially available set-up to measure the SEE coefficient. We have designed a system, which has been named SEE-tool to measure the effective γ values. In this technique a discharge is produced in a cell (or pixel) (having conditions similar to those existing in real PDPs) in pure noble gases (or their mixtures), and then Paschen curve is obtained that can be matched with model calculations to yield the ion-induced SEE coefficients. The system includes a ultra high vacuum chamber (~10-9 Torr) inside which the test sample (dielectric-emissive layer coated) is placed during measurements.
The firing voltage in such a setup is uniquely related to the ion-induced γ value, without any fudge factors involved. The breakdown voltage for a particular gas discharge setup depends only on the product pxd, where p is the pressure in the system and d the distance between the electrodes (Paschen law). The γ-coefficient determination is, therefore, based on breakdown voltage measurements as a function of pxd, i.e., the measurement of Paschen curves. Plasma firing voltages vs. the product of pxd are measured using the set up depicted in the figure below. 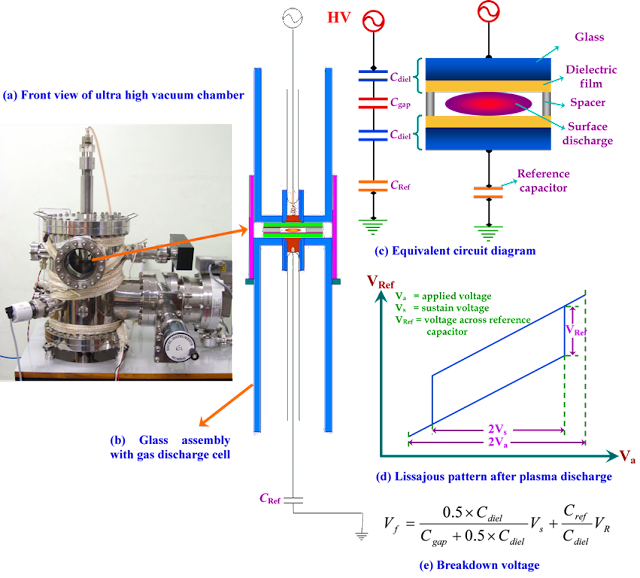 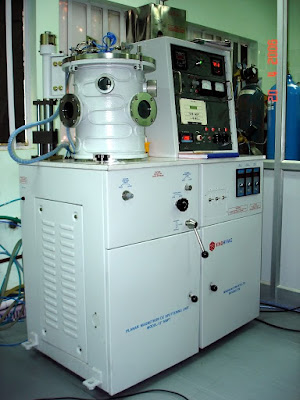 We have achieved MgO thin films with preferred growth along the desired crystalline orientation and controlled growth rates. The films show high optical transmittance in visible range. These films are investigated using different microstructural characterization tools like spectroscopic ellipsometry (SE), atomic force microscopy (AFM), scanning electron microscopy (SEM), and (EDAX). The measured γ of these films are seen to differ in MgO films having different preferential orientations. We have measured the γ on MgO single crystals having a particular type of orientation to know the correlation between γ and crystal orientation. A knowledge about the growth of the preferentially oriented MgO thin films is helpful to optimize the deposition conditions that can lead to the desired types of films. Other aspects of the MgO protective layer that are being explored involve a structural modification in the film, so that the altered physical properties result in improved electrical properties.
Diamond-like carbon
New PDP cell structures have been developed that do not need a transparent protective coating. This will enable the development of a complete new class of non-transparent protective layer materials, like diamond. It will also allow the processing of the dielectric layer in PDP at 500°C, thereby enabling the use of soda-lime glass, even for high definition panels.
DLC is an attractive surface protective layer for dielectric materials inside PDPs due to its high γ and good optical transmission (with proper film optimization). We are preparing DLC films by PECVD technique (with DC and pulsed-DC power supplies) using gas mixture of acetylene (C2H2) and hydrogen (H2). We are investigating the effect of several deposition parameters on DLC film microstructure, its optical properties and SEE. These films are characterized by Raman spectroscopy, SE, FTIR, AFM, SEM, and EDAX. 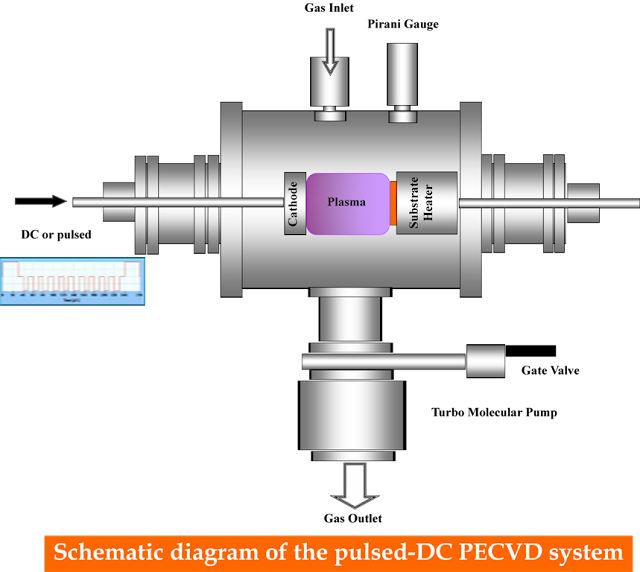 Carbon Nanotubes
Carbon nanotubes (CNTs) are formed from a single sheet of graphite (a hexagonal lattice of carbon) called “graphene” rolled into a seamless cylinder. Multi-layer techniques used in dielectric-emissive layers in PDPs include MgO layers deposited on CNT. Such bilayer MgO-CNT films show very high γ values, and the strong CNT layer acts as a protective shield for the MgO layer.
We have prepared multi walled carbon nanotubes by PECVD (with both DC and Pulsed DC power supplies) technique using C2H2 + H2 gas mixture. The PECVD technique does not require high synthesis-temperature as it uses heat as well high energy electronsin the plasma to dissociate the feed gas and hence it allows CNT growth at significantly lower temperatures. In addition, the electric field in PECVD method enables the growth of more vertically aligned CNTs than possible with other deposition techniques. Thus microstructural modifications in such layers will be investigated for optimization of γ and other properties. 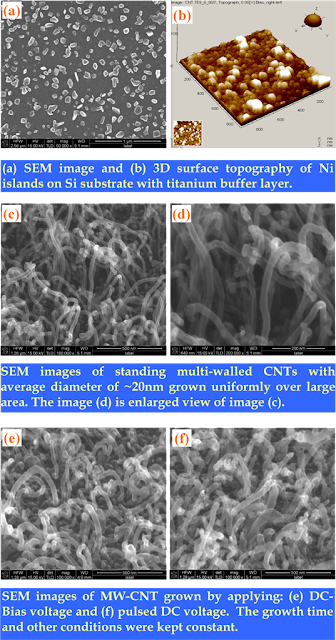