Theme:
Plasma deposited hydrogenated microcrystalline silicon (µc-Si:H) offers the possibilities of high carrier mobilities and stability against light and current induced degradation along with an ease of large area processing capabilities making it attractive for use in solar cells and thin film transistors. However, µc-Si:H material is heterogeneous in nature consisting of crystalline and amorphous phases with presence of density deficient regions. It does not have a unique microstructure due to the processing history. Moreover, optoelectronic properties being intimately linked with the detailed nature of film microstructure makes it difficult to compare the results obtained from various laboratories. Though µc-Si:H has been studied for well over two decades, the presence of significant disorder in terms of size and shape variations in crystallites (grains) and the nature of amorphous or disordered phase (boundaries) complicates a comprehensive description of the optoelectronic properties in this heterogeneous material. In particular, little is known about the recombination mechanisms and the nature of the density of gap states.
Our group's research has been focussed on the issues of correlation between the microstructural characteristics and optoelectronic properties of plasma deposited single-phase microcrystalline silicon. I briefly describe below the specific issues regarding the various aspects of structural and transport properties of µc-Si:H, and the outcome of our research. 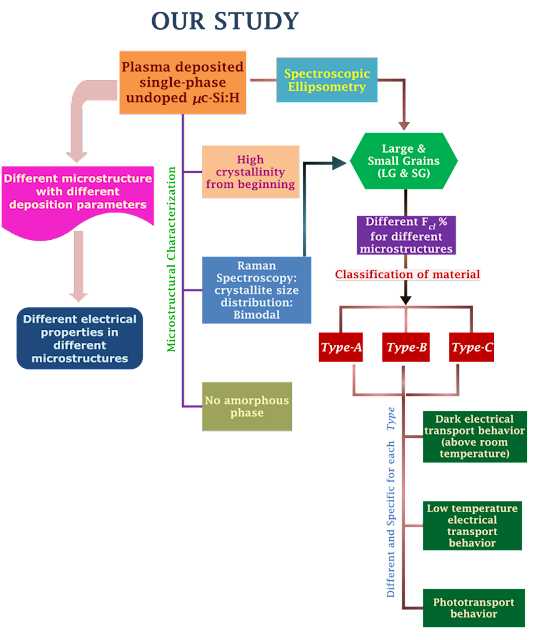 Therefore, in our microstructural studies of plasma deposited highly crystallized single-phase undoped µc-Si:H, a deconvolution model incorporating the distribution in the sizes of crystallites has been applied to explain the experimentally observed RS profiles. The deconvolution of RS profiles distinguishes two distinct large and small-sized crystallites in the material. Our study demonstrates that in the absence of an amorphous phase, the asymmetric low frequency tail in RS profiles of single-phase µc-Si:H can indicate the presence of a distribution of nanocrystallites. The fractional compositional analysis of the films obtained by this methodology are found to be in qualitative agreement with the findings of other microstructural studies and the overall microstructural picture that emerges from the results of spectroscopic ellipsometry, atomic force microscopy and X-ray diffraction is found to be self-consistent.
(more on bimodal CSD in µc-Si:H)

To summarize this classification, the type-A films have small grains, low amount of conglomeration (without column formation), and high density of inter grain boundary regions containing disordered phase. In this type, Fcl is less than 30% and σ0 and Ea are constant [~103 (Ωcm)-1and ~ 0.55 eV respectively]. The type-B films contain a fixed ratio of mixed grains in the bulk. There is a marked morphological variation in these films due to the commencement of conglomeration of grains resulting in column formation, and a moderate amount of disordered phase is present in the columnar boundaries. Here Fcl varies from 30% to 45% and there is a sharp drop in σ0 [from ~103 to 0.1 (Ωcm)-1] and Ea (from ~ 0.55 to 0.2 eV). The type-C µc-Si:H material is fully crystallized, crystallite conglomerates are densely packed with significant fraction of large crystallites (>50%) and preferential orientation is seen. Here σ0 shows a rising trend [from 0.05 to 1 (Ωcm)-1] and the fall in Ea is slowed down (from 0.2 to 0.10 eV).

The significance of this classification is that where film thickness (films of same thickness can have very different microstructures), total crystalline volume and deposition parameters fail to correlate to transport properties in any systematic way, the classification based on Fcl used in our studies provides consistent correlation that can be explained using known models.

MNR and Anti-MNR in single-phase undoped µc-Si:HMeyer-Neldel Rule (MNR) is a well-known phenomenon seen in many thermally activated processes, including electronic conduction in amorphous or disordered semiconductors, where it correlates exponentially the conductivity prefactor (σ0) and the conductivity activation energy (Ea) with the equation: σ0 = σ00exp(G.Ea), where G and σ00 are called MN parameters. Often G-1is denoted as EMN, the Meyer-Neldel characteristic energy. Various theories have been put forward for explaining the observed MNR in amorphous silicon, the most popular among these being the model invoking a statistical shift of Fermi-level (Ef) with temperature. Apart from MNR, another interesting and important phenomenon is the anti-MNR, in which a negative value of EMN is seen. Anti MNR, has been reported in heavily doped µc-Si:H and heterogeneous Si thin film transistors. This phenomenon has been explained by the Ef moving deep into the band tail.
In our studies of electrical conductivity behavior of highly crystallized undoped µc-Si:H films having different microstructures, the dark conductivity was seen to follow MNR in some films and anti MNR in others, depending on the details of microstructural attributes and corresponding changes in the effective density of states distributions. A band tail transport and statistical shift of Fermi level were used to explain the origin of MNR as well as anti-MNR in our samples.
We further analyzed a sizeable amount of reported experimental transport data of µc-Si:H materials to establish evidence of MNR and anti-MNR and demonstrate the consistency and physical plausibility of statistical shift model in explaining these phenomena. We have derived well-substantiated and generalized values of Emin, σM, and values of σ0 and Ea where γf = 0 and γf = γc, which hold true for a wide microstructural range of µc-Si:H system, and can further add to our understanding of the electrical transport in this heterogeneous material.

Low temperature dark electrical transport in single-phase undoped µc-Si:H
The dark electrical conductivity σd(T) of µc-Si:H is intricately linked to the film microstructure. Different transport models are used to explain conduction at low temperatures, depending on the observed temperature dependence (T -1/2 or T -1/4) of σd. Our studies demonstrate that at low temperatures (300–15 K), dark conductivity in highly crystallized undoped µc-Si:H films follows different temperature dependences for different microstructures. The fractional composition of large crystallite grains (Fcl) in our material emerges as a dominant parameter in the study of correlation between film microstructure and its transport properties.
A T -1/2 dependence of low temperature σd(T) is observed in highly crystallized µc-Si:H films (type-C) having tightly packed large columnar grains and high percentage fraction of large crystallite grains, suggesting a presence of tunneling of carriers between neighboring conducting crystals, similar to the metal-insulator composite systems.
The T -1/4 dependence of low temperature σd(T) is observed in types-A and B µc-Si:H films having a low percentage volume fraction of large crystallite grains and low degree of conglomeration, which is well addressed by Godet’s variable range hopping (VRH) model that proposes hopping in exponential band tail states.
The application of these two different transport models leads to the deduction of physically rational parameters (for each model) and material properties of µc-Si:H material, including DOS values with an exponential distribution near Fermi level, which are in good agreement with film microstructure.
A significant observation is that the Fcl values which were initially found to be helpful in correlating, segregating and understanding the different film microstructures, were equally useful to correlate the observed dark transport behavior (at both high and low temperature ranges) to the three types of film microstructures, albeit empirically.